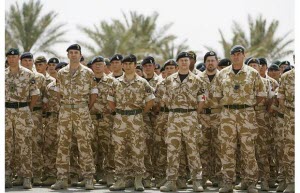 A very strict officer was talking to some new soldiers whom he had to train. He had never seen them before, so he began: “My name is Stone, and I’m even harder than stone, so do what I tell you or there’ll be trouble. Don’t try any tricks with me, and then we’ll get on well together.” Then he went to each soldier one after the other and asked him his name. “Speak loudly so that everyone can hear you clearly, and don’t forget to call me "sir".
Each soldier told him his name, until he came to the last one. This man remained silent, and so Captain Stone shouted at him, “When I ask you a question, answer it! I’ll ask you again: What’s your name, soldier?” The soldier was very unhappy, but at last he replied. “My name’s Stone-breaker, sir”, he said nervously.
Nghe cả bài:
Bình luận
Báo lỗi - góp ý
Bài học yêu thích
Bài học liên quan
Bài học trước
Bài học sau
ĐĂNG PHẢN HỒI CỦA BẠN CHO BÀI HỌC NÀY
CÁC Ý KIẾN BÌNH LUẬN - PHẢN HỒI VỀ BÀI HỌC NÀY
Đăng bởi thành viên Xếp theo