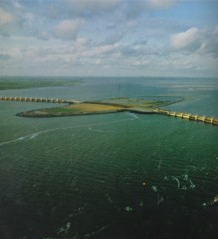 For many, the image out of the Dutch fight against the North Sea rests in the figure of a young boy valiantly saving his town by using a finger to plug a hole in the dike. But this familiar hero is a fictional one, a creation of American author Mary Mapes Dodge in her book, Hans Brinker.

In reality, heroism falls on all the Dutch, who for more than a millennium have been wresting precious agricultural lands from the sea and fighting to hold on to them. Their greatest achievement - a colossal fun in the dike is known as that Netherlands North Sea Protection Works.

Because much of the Netherlands lies below sea level, normal tides would daily inundate about half the country if previous generations of industrious Dutch had not raised dikes and dams. Severe storms often cause tidal waters to crash into the dikes and inundate rivers and estuaries.

Although all of the coastal areas are threatened, two particularly vulnerable ones are the large tidal inlet formerly known as the Zuider Zee and the delta created by the Rhine and Meuse rivers in the southwestern corner of the country.

Dutch engineers propose that the Zuider Zee be dammed and drained in the 19th century, but the government was reluctant to tackle such an immense project.

Then, in 1916, a furious storm hit the Northern provinces. The difficulties of wartime agricultural production were compounded, and the way was paved for the damming of the Zuider Zee.