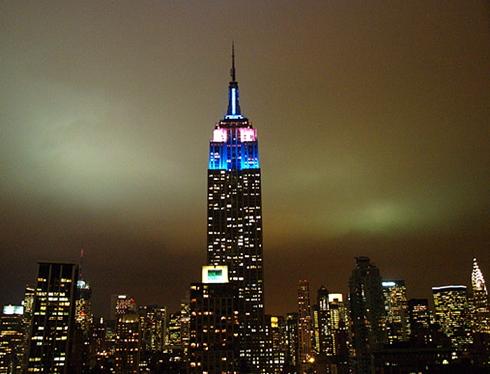 The Empire State Building is a 102-story skyscraper in New York City at the intersection of Fifth Avenue and West 34th Street. Its name is derived from the nickname for the state of New York.

It stood as the world's tallest building for more than forty years, from its completion in 1931 until the construction of the World Trade Center's North Tower was completed in 1972.

Following the destruction of the World Trade Center in 2001, the Empire State Building once again became the tallest building in New York City and New York State.

The Empire State Building has been one of the Seven Wonders of the Modern World. The building and its street floor interior are designated landmarks of the New York City Preservation Commission, and confirmed by the New York City Board of Estimate.

It was designated as a National Historic Landmark in 1986. In 2007, it ranked number one on the List of America's Favorite Architecture sights according to the AIA. The building is owned and managed by W&H Properties.

The Empire State Building is the second tallest skyscraper in the Americas (surpassed only by Chicago's Willis Tower) and the 11th tallest in the world. The Empire State building is currently undergoing a $120 million renovation in an effort to transform the building into a more energy efficient and eco-friendly structure.

Kaido's era is over.
bảo bảo